Home » Are you sure you want to answer this question?

Are you sure you want to answer this question?


Yes. There is a very simple, effective heuristic that adjusts to the preference of each user.

Place a check box in the warning message dialog that says:

Which can be improved further by stating where that dialog can be reenabled.

These are Confirmation messages – Windows have a fairly detailed page on their guidelines. The whole of that page is pretty useful but here’s some excerpts (emphasis mine):

Confirmations are most useful when the action requires the user to make a relevant and distinct choice that can’t be made later. That choice often involves some element of risk that isn’t obvious to the user, but risk isn’t essential to confirmations. These elements are necessary to justify the interruption of responding to a modal dialog.

(No further emphasis from me for the below):

Is this the right user interface?

To decide, consider these questions:

Here are some design alternatives that eliminate the need for routine confirmations:

Further than this, which I think is also worth mentioning from a separate page on UI principles taken from various books talks about novice users:

10. The principle of safety

Novice users need to be assured that they will be protected from their own lack of skill. A program with no safety net will make this type of user feel uncomfortable or frustrated to the point that they may cease using the program. The “Are you sure?” dialog box and multi-level undo features are vital for this type of user.

Apple Guidelines don’t seem to have any guidelines on when, just “don’t over use”:

When it’s possible that users are unaware that their action might have negative consequences, it can be appropriate to phrase the alert message as a question. For example, a question such as “Are you sure you want to clear history?” pinpoints the action users took and prompts them to consider the results. However, don’t overuse this type of alert; users tire quickly of being asked if they’re sure they want to do something.

Use title bar alerts only for high-risk situations, such as the potential loss of connectivity. Users should be able to understand the choices based on the title and button text alone.

If a title is required: 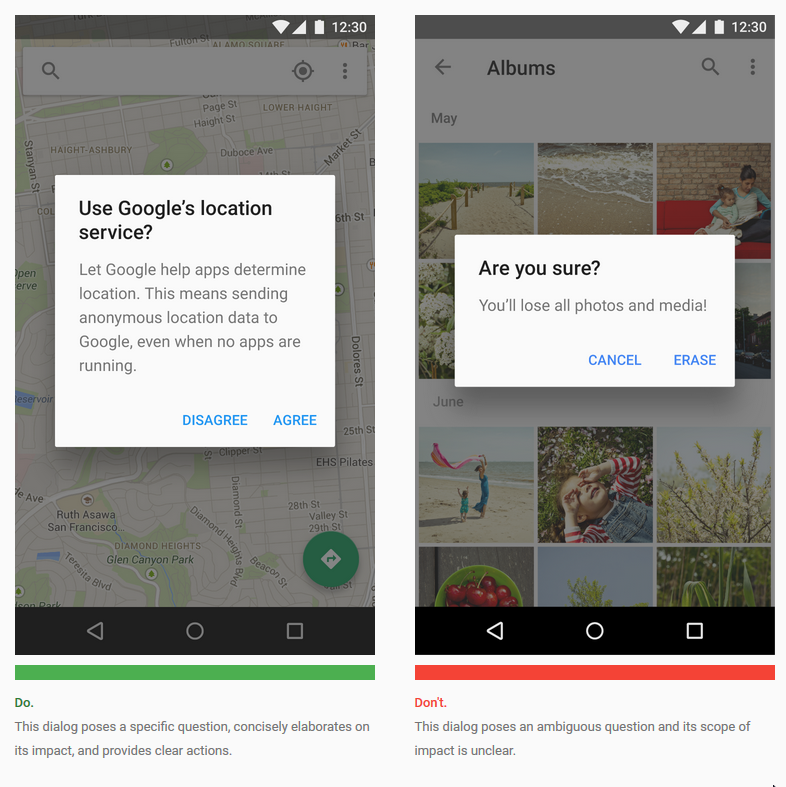 I’m surprised nobody brought up the Mac OS X shut down dialog. It presents you with an “Are you sure?” window, but has a timer so that if the user walks away, expecting the computer to have shut down, it will while still allowing the user time to cancel.