Shamelessly copy/pasting my answer from serverfault just the other day 🙂

The linux virtual memory system isn’t quite so simple. You can’t just add up all the RSS fields and get the value reported used by free. There are many reasons for this, but I’ll hit a couple of the biggest ones.

There are many other reasons the numbers might not add up. This answer is just trying to make the point that memory management is very complex, and you cant just add/subtract individual values to get total memory usage.

If you’re looking for memory numbers that add up have a look at smem:

smem is a tool that can give numerous reports on memory usage on Linux systems. Unlike existing tools, smem can report proportional set size (PSS), which is a more meaningful representation of the amount of memory used by libraries and applications in a virtual memory system.

Because large portions of physical memory are typically shared among multiple applications, the standard measure of memory usage known as resident set size (RSS) will significantly overestimate memory usage. PSS instead measures each application’s “fair share” of each shared area to give a realistic measure.

So PSS is the interesting column here because it takes shared memory into account.
Unlike RSS it’s meaningful to add it up. We get 654Mb total for userland processes here.

System-wide output tells about the rest:

Overall about half of memory is used for cache (494Mb).

Bonus question: what is userland cache vs kernel cache here ?

btw for something visual try: 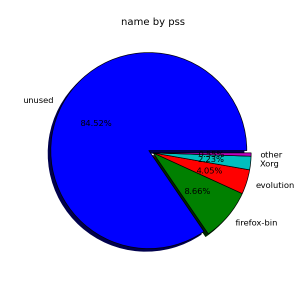 A really good tool is pmap which list the current usage of memory for a certain process:

For more information about it see the man page man pmap and also have a look at 20 Linux System Monitoring Tools Every SysAdmin Should Know, which list great tools I always use to get information about my Linux box.