Home » How can I find an optimum set of colors for 10 players?

How can I find an optimum set of colors for 10 players?


You could generate equidistant hue values in the HSV space:

However, it’s possible that you will not always have 10 players. In that case, the palette would not be very efficient unless you re-generated a different palette for another number of players. Instead, some authors recommend generating a palette using the golden ratio, taking advantage of a property resulting from the equidistribution theorem:

Many irrational numbers will do, but the golden ratio will work best (it has been proven).

Finally, you can use two different generating sequences in order to tweak S or V, too. For instance (edit: I added the sqrt call for better equidistribution):

Update: the above results can be improved by using a correction curve for H (similar to the gamma curve for RGB components) that takes the human visual system into account. This is the hue correction curve that I computed using the CIEDE2000 metric: 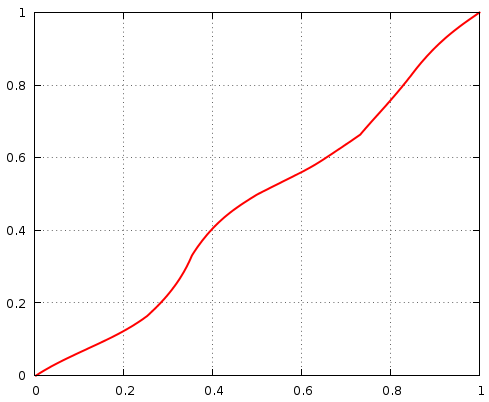 The results for equidistant hue values are as follows:

And for the golden ratio generation sequences (with and without tweaks on V):

I will publish an approximation of the curve formula for use in programs as soon as I find a reasonably good one.

The 8 StarCraft colors are:

Obv. Blizzard are UI geniuses and have studied the problem.

They left Green out as a swap-in for Brown on desert maps, so technically there are 9 listed there.

Here’s how this looks:

As you can see, they are quite distinct and easily distinguishable. Dark green is actually easy to distinguish from teal, possibly because the human eye can most easily distinguish shades of green. If you’re sure your players will be female tetrachromats you probably could pick any colors though.

A few people here recommend dividing up HSV color space at 10 equidistant positions on hue. In my opinion, this is actually not a good solution. The human eye does not perceive differences in color equally across the HSV spectrum. For example, what we’d call orange occupies a tiny slice of the band, whereas a good 25% chunk might qualify as green. So it starts with a bad premise. Look at the first row of colors in this answer. The two greens are almost indistinguishable.

Remember your users will need to communicate about and refer to the colors. In light of this, the Starcraft/Warcraft theme is a great lead to follow. Choosing based on a list of plain English Crayola colors is not a bad idea at all, because you’ll end up with familiar named colors. Then just tweak those colors to be bold, muted, whatever matches your aesthetic, as long as they’re still recognizable as i.e. Red, Orange, Yellow, Green, Blue, Purple, Brown, Gray, White, Black.

Edit: the connection between language and color perception is so interesting, I just wanted to share this awesome link:

The crayola-fication of the world: How we gave colors names, and it messed with our brains on Empirical Zeal

How to display `top` results sorted by memory usage in real time?

Use the top command in Linux/Unix: top press shift+m after running the top command or you can interactively choose which column to sort on press Shift+f to enter the interactive menu press the up or down arrow until the %MEM choice is highlighted press s to...

How can I resolve a hostname to an IP address in a Bash script?

You can use getent, which comes with glibc (so you almost certainly have it on Linux). This resolves using gethostbyaddr/gethostbyname2, and so also will check /etc/hosts/NIS/etc: getent hosts unix.stackexchange.com | awk '{ print $1 }' Or, as Heinzi said...

Scroll inside Screen, or Pause Output

Screen has its own scroll buffer, as it is a terminal multiplexer and has to deal with several buffers. Maybe there's a better way, but I'm used to scrolling using the "copy mode" (which you can use to copy text using screen itself, although that requires the...

How to get execution time of a script effectively?

What is the difference between /opt and /usr/local?

While both are designed to contain files not belonging to the operating system, /opt and /usr/local are not intended to contain the same set of files. /usr/local is a place to install files built by the administrator, typically by using the make command (e.g.,...

Finding the PID of the process using a specific port?

Your existing command doesn't work because Linux requires you to either be root or the owner of the process to get the information you desire. On modern systems, ss is the appropriate tool to use to get this information: $ sudo ss -lptn 'sport = :80' State...

kill -9 (SIGKILL) always works, provided you have the permission to kill the process. Basically either the process must be started by you and not be setuid or setgid, or you must be root. There is one exception: even root cannot send a fatal signal to PID 1...