Home » How to search the Play Store by permissions?

How to search the Play Store by permissions?


How it currently CAN be done

During my morning routine reading my RSS feeds, I stumbled on a review at N-Droid, discussing an app named APEFS. This app is developed by German students (hence its description on the Playstore is in German, even if you set the language to English). But for our non-German readers, a short description here:

Basically, APEFS is an alternative front-end to the Google Playstore. You browse the playstore as you do with the original app, and search it the same. But when on the results list1, an advanced filter2 comes into play:

However: While this can be used to filter out apps with unwanted permissions (e.g. show only apps whitout the Internet permission), you can not restrict your results to the opposite (e.g. show only apps with Internet permission). The app clearly targets at users concerned about their privacy/security — and according to the review (I just found it a couple of minutes ago, so I could not test it yet) it does a very good job.

As it’s already a year ago, and the promise on the APEFS Homepage (GTransed to English, as their own English version doesn’t have that statement in the first paragraph) seems not to be fulfilled anytime soon (the app is still offline): Please consider the web-based solution from my other answer as an alternative meanwhile.

More than two years have passed since this question was asked. Still, there’s no „official solution” available. Despite its promises, APEFS (introduced in my previous answer over a year ago) has not returned. So I decided to create my own solution:

For almost 4 years now, I maintain listings of „Android apps by purpose”, i.e. grouped by their use cases. In march, I started moving them to my own server. All MetaData are stored in a database on that server, and so finally I was able to setup a search by permissions. 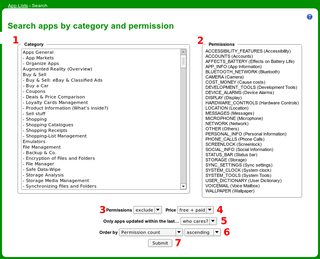 You can select between 1 and 5 categories here (note that selecting a „parent category” automatically includes all its „children”), plus one or more permissions. Default presets are for finding „permission-friendly apps” – so if you’re after such a candidate, you can simply submit the form after having made described selections. This should make it easy to e.g. find a PIM app which does not request the Internet permission (to keep your personal data on your device).

However, the opposite is possible as well: If you e.g. want to investigate what good NFC can do for you, select the up to 5 categories you’re interested in, then the NFC permission, switch the „Permissions” dropbox to „include”, and optionally the sorting to „by rating, descending” (to get the best-rated apps first).

When in doubt, there’s that little question-mark icon in the top-right corner, providing you with some „online help”.

But that’s not all. As I’ve explained in the second paragraph, apps in my lists are grouped by their „purpose”, i.e. what you need them for. So apps with comparable functionality should appear next to each other: 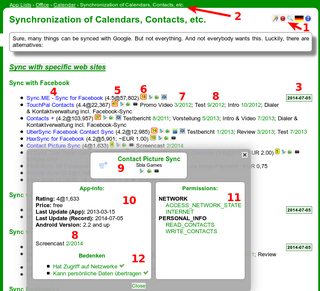 So you can compare them not only by rating, but also pick the one requesting less permissions (number in the box; in above image indicated by a „red 6”) or, if possible, without any concerns (no red border around the box). Clicking the app’s name reveals some more details, as shown. And there are many „easter-eggs” (i.e. MouseOver events) – again, be pointed to the help page.

Full disclosure: As initially indicated, the described site was designed by me, built by me, filled by me with its content, and is further maintained by me. It’s available bi-lingual (English/German), free of any charge (this includes: no cookies, Flash-cookies, whatever), etc. This question here at Android.SE was one of the reasons I’ve set it up.

Further be aware of the fact that this doesn’t cover the entire „playstore collection”. As of today, there are a little over 10,000 apps recorded in the database (which is probably a little less than 1% of what’s on Play – unless you don’t count the crap, fakes, and useless apps on Play, then my records might cover about 10% ☺). Still I hope (and think) it’s already a useful resource you’ll enjoy.

Why currently  this can’t be done

When a developer performs the upload of his application to Google Play, the application manifest file gets read to a database, from where the search for apps is performed.

To allow searching for applications based on their permissions, one would have to access the database and collect data that concerns the application manifest node <uses-permission>, previously read from the AndroidManifest.xml file, where the developer has declared his application permissions.

While this seems quite straightforward, Google API does not provide means to this end:

Strictly, Google Play does not filter based on <uses-permission> elements.

From the Filters on Google Play Filtering based on Manifest Elements – <uses-permission>.

All of this is done silently without the intervention of any search parameters.

A user either from Google Play or third party search engines, can limit the results after they get automatically filtered by Google, based on personal preferences like excluding paid apps; limit the results to apps that are compatible with the user devices, among others. But there’s no way to interfere with the filters applied by Google. Even if, some how, we get to that part, the API essentially isn’t prepared/designed to filter based on permissions as mentioned above.