Home » Is coffee a good excuse for a slow application start-up time?

Is coffee a good excuse for a slow application start-up time?


To me, the basic logic is this:

It’s better to have a fast app than a slow app. While there are many studies that show that faster applications provide better UX, it seems pretty axiomatic to me. I mean, generally in life if we want something done, then we prefer it to be sooner than later (with the exception of various aesthetic and, um, other activities where the point is enjoying the process… I doubt that an application loading is such a process although sometimes it can be made one).

The customer doesn’t object to the app being faster, he just doesn’t care. That’s a big difference. If you make it faster, he won’t come to you asking to slow it down because now he doesn’t have time for coffee.

So, this is something that you generally ought to do, but you don’t really need to. If it were free and you could do it with a click of a button, then I think the answer would be clear – you ought to do it. But it’s not free, so it comes down to cost-efficiency. If you can invest your resources in something that the user does want, do that (provided it’s the only user of the app etc. etc., as @yisela says). But if you have the resources available for this at a low cost, do something that would make the app objectively better – speed it up.

*Sometimes making specific processes slower can achieve specific UX goals. There was a famous case study where some process, probably saving or performing a calculation, was made instantaneous for a new release of a product, and users, who were accustomed that it takes time, weren’t sure whether the process ever took place in the new version. This created a lot of confusion and they pressed the button over and over just to make sure it worked. So the developers pretended to slow it down by providing a quick loader or a progress bar or something, which helped put the users at ease. I can’t find the link right now. But this is not the case here.

You should try performing A/B split testing to see which group of users is more productive. The first group will be denied coffee, but the application loads instantly. The second group will be given coffee while it loads.

I would propose that the second group, despite the 8 minute delay will finish the days work first 😉 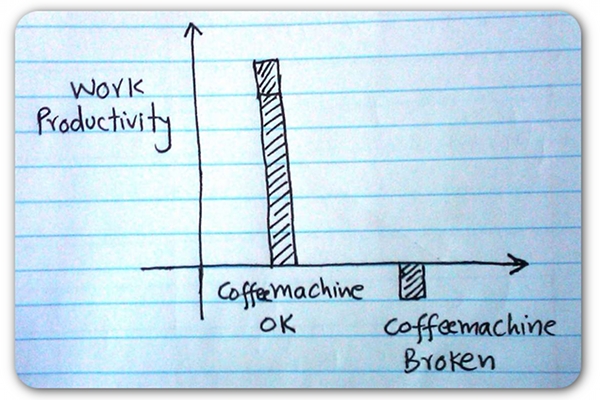 But of course, Yes! You can never ever underestimate the value of a good cup of coffee. You know for a fact that coffee is the number one most important thing in an office which could make the office worker succeed or fail, at least according to Baltimore Business Journal:

The office coffee is more important than it seems

…
workplace experts say that depending on how it is handled, coffee can
either be a perk that fuels employee morale or an annoyance that
steams up workers to the point where they feel alienated and
disgruntled.

So the answer to your question is obviously yes!