Among the many other related questions on the site, there’s an often linked article for map generation: Polygonal Map Generation for Games you can glean some good strategies from that article, but it can’t really be used as is.

While not a tutorial, there’s an article on how Dwarf fortress world maps are generated. Basically you generate multiple layers of noise, for height, moisture, temperature, salinity. Then you’d use something like this: 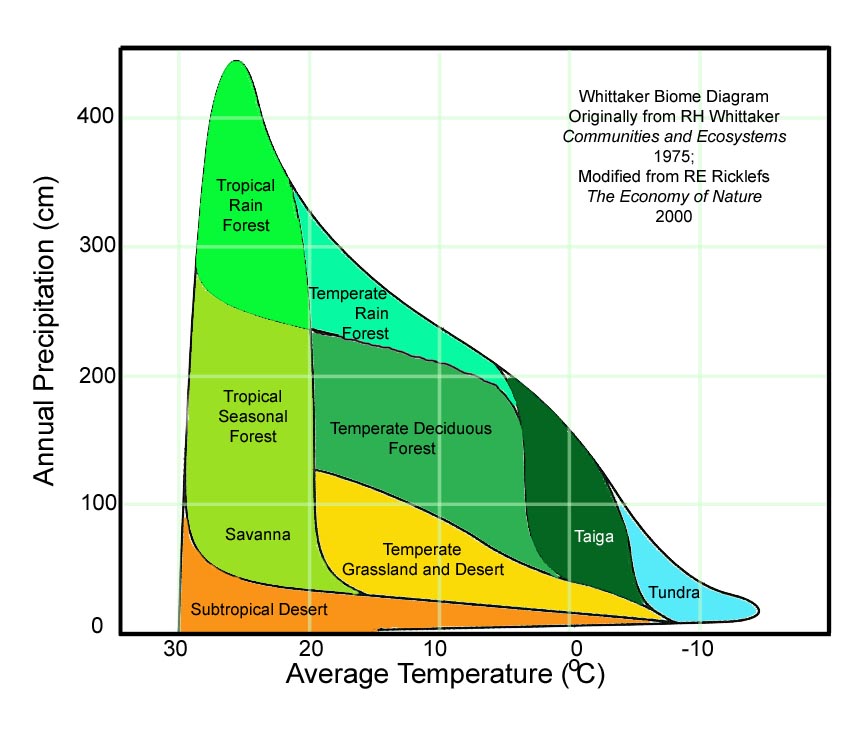 to generate biomes based on the layers of noise you produced before. Typically this gives a fairly smooth transition between biomes and the transitions are logical.
I also modify the moisture and temperature maps based on elevation. This naturally generates a “timber line” and produces rocky mountains with snowy caps.

I’m using this strategy my game and it produces maps like this very quickly:

Additionally, you can see me scroll through a few more maps at the beginning of this video.

And here’s some more to get you started:

How can I create a random “world” in a tile engine?

How can I identify feature regions in a procedurally generated world?

How do I create tileable solid noise for map generation?

While the other answers here are really good for generating the kinds of static landscapes that would work for this specific need. There are other methods that people coming across this question might be looking for if they want to create landscapes that change over time or appear much more realistic you can follow this technique.

Unlike the other answers you begin this with an entirely empty map. Start with what you would consider to be sea level. Use Perlin Noise to add very slight variation, if you have 256 possible elevations, don’t vary more than 3-5 in either direction. This builds the first few billion years of your landscape without having to actually run a simulation for that long.

Split the map along straight or curved lines to create plates, the more detailed the shapes of the plates the more interesting your landscape with be. Keep them large. Give each plate a direction, speed. Over a given timeframe move the plates in step-wise fashion around the map, dragging all tiles above them with them.

When two plates cross, make a choice of which will go over and which will go under, this choice can be random. Tiles on plates designated under are instantly reduced in height by 5 steps. Once a plate has been designated over or under, all future interactions with plates will follow these rules:

All plates that cross slow by 20% of their current speed each step. For added realism, add a random -10% to 10% change in direction of movement each step.

After performing the desired number of steps. Probably 5-10 are plenty. Any tiles where no plates are resident, should be dropped to the lowest existing level.

This map can be used as is, or be expanded to create a much larger map by breaking it into 4X4 tile(cell) chunks and expanding those sections based on their individual elevations. Treat each cell’s elevation as a point, and create a smooth gradation in the larger map between those points. So, if the larger map is 40X40 instead of 4X4, and point (0,0) was 10 and point (0,1) was 1, the tiles on the larger map between them would be 10,9,8,7,6,5,4,3,2,1 in height. Further Perlin Noise can be added to de-smooth the slopes. Over all this scaling technique is similar to the Diamond Square algorithm.

To simulate rivers and lakes, oceans and water tables. I prefer to use cellular automata.

Heights become floats or expanded int ranges to allow for finer grained tracking. Water cells have saturation values, say in the range of 1-256. The maps should start evenly. You’ll need to play with the numbers for your individual map sizes, however generally you will follow rules something like this:

Make this check for every neighboring cell. Run through a sufficient number of steps. If you want, you can add temperature to this simulation by changing the amount of lost/gained saturation by that temperature. You also can change it based on elevation. Natural lakes and rivers should form. Some will fall into the ocean. (The ocean won’t probably fill by any metric, but you’ll designate anything under sea-level to be water filled at the end anyway.)

You can keep the temperature and saturation data to use, like in the other answers, to create biomes. They should be MUCH more accurate and interesting. With snowy biomes at the poles and hot ones in the middle (if you uses a smooth graduated list of temperatures.)

If you keep the simulations for land, water, and heat around and dramatically reduce their effects and also stop the plates from moving, you can continue to change all of these metrics over time. I wouldn’t run the calculations very often, but you can get a world map that responds to changes this way.

While these kinds of techniques are way more involved, they produce a lot more realistic and evolving effects. Take it for what it is worth?

You can use Perlin Noise for the generation of the terrain, here is how the biomes in Minecraft work.
As you can see he uses a heatmap in combination with a rainmap to create the biomes. 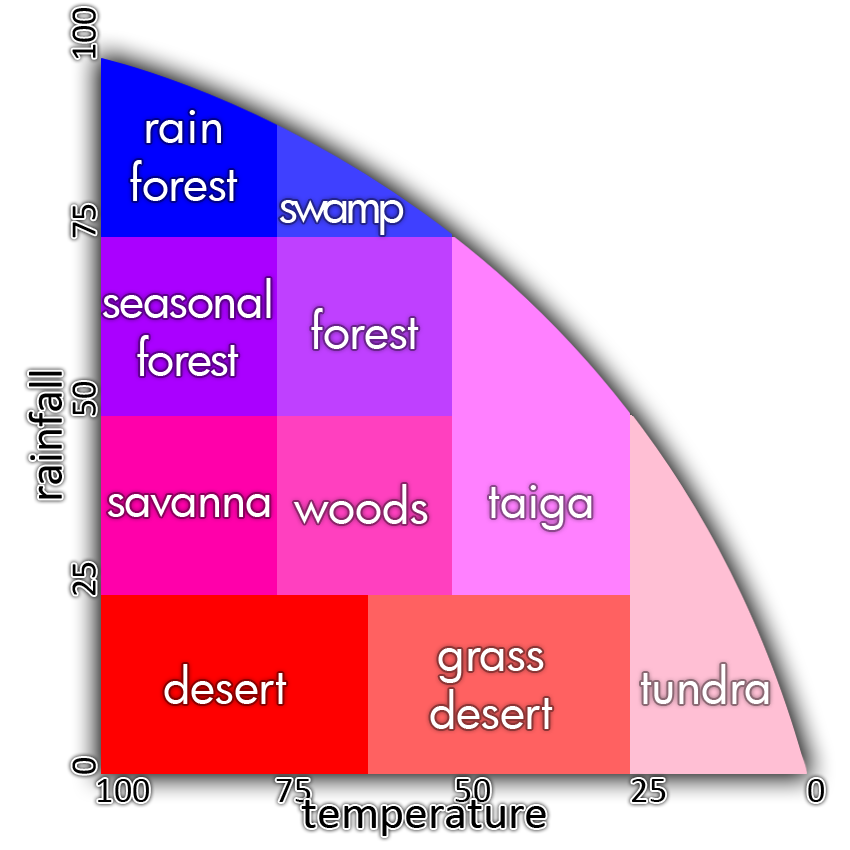 Performance issue with this code [closed]

In short: You should create,open,use,close,dispose Connections where you're using them. The best way is to use the using-statement. By not closing the connection as soon as possible, the Connection-Pool needs to create new physical connections to the dbms which...

Compare a pointer to an integer in C [closed]

Here's what I think you meant to post, it still doesn't compile though, since you can't compare a pointer to a char /* *Description: Construction of a social network */ #include <stdio.h> #include <strings.h> #include <stdlib.h> #define SIZE...

If you are using jQuery UI, the jQuery documentation on autocomplete is straightforward. Put your array as the source: and it should work automatically. IMHO, You seriously need to spend some time for googling and looking into the documentations. jQuery UI...

having all my scores and names in one big array

Execute a specific command in a given directory without cd’ing to it?

I don't know if this counts, but you can make a subshell: $ (cd /var/log && cp -- *.log ~/Desktop) The directory is only changed for that subshell, so you avoid the work of needing to cd - afterwards. Not to undermine the value of answers given by other...

After pacman finally deprecated the --force option and made the surrogate --overwrite option work as expected, the following usage pattern should be noted. A command to reproduce the --force option that blindly overwrites anything that conflicts is this: sudo...

How to determine the maximum number to pass to make -j option?

nproc gives the number of CPU cores/threads available, e.g. 8 on a quad-core CPU supporting two-way SMT. The number of jobs you can run in parallel with make using the -j option depends on a number of factors: the amount of available memory the amount of memory...

You can take this json and put it in the loop through length of the json and show data into the table. This is how i solved it <?php try{ $url="the json url goes here"; // path to your JSON file $data = file_get_contents($url); // put the contents of the...

Anything else is written after the return keyword it's unreachable. Remove return super.getView(position, convertView, parent); from the first line of your function. This is a warning, telling you that static analysis of the code shows that some of your code...

index out of range but is in fact in range [closed]

Well try to debug your code by yourself first. Anyhow for your question Why is this happening? : It gives you error in postCode = split_address[4] because your list has 4 elements 0,1,2,3 and you are accessing the 4th element which is not present.. you don't...

I would first try a softer way. Stop the automatic updater. sudo dpkg-reconfigure -plow unattended-upgrades At the first prompt, choose not to download and install updates. Make a reboot. Make sure any packages in an unclean state are installed correctly. sudo...

What I think you're trying to achieve is that when you call your method "horn" with some parameter it has to either use "Beep!" or "Boop!". First of: void horn(a,b) Is not a valid function signature in Java, in a java function you always have to specify what...

Cannot use method returned value into another method

Using @super's suggestion and a little warning fixing. The two important changes are in the line as suggested by @super: printf("r=%.3f; phi=%.3fn",distanta(),phi()); The variables 'r' and 'unghi' are both variables local to member functions and cannot be...

Class has no member speak? [closed]

void::speak(); //THE GLOBAL SCOPE HAS NO SPEAK It's interpreting this as void ::speak() where leading an identifier (a name) with :: indicates to C++, "Look in the global scope of all names". :: is the "scope resolution operator" In the header file, you should...

Convert code with multiple lines into one line

How to POSITION my Marker to Always Follow the Slider-Handle?