Home » Should a toggle button show its current state or the state to which it will change?

Should a toggle button show its current state or the state to which it will change?


In About Face 2.0 (there is a v3 but I haven’t got it) Cooper and Reimann (2003, pp. 341-2) treat this subject under the heading “Flip-flop buttons: A selection idiom to avoid”. I strongly suggest to consult this book as I will only present an excerpt:

Flip-flop button controls are very efficient. They save space by controlling two mutually exclusive options with a single control. The problem with flip-flop controls is that they fail to fulfill the second duty of every control – to inform the user of their current state. If the button says ON when the state is off, it is unclear what the setting is. If it is OFF when the state is off, however, where is the ON button? Don’t use them. Not on buttons and no on menus!

The authors (and I think of these as an authority on the subject) presents two possible solutions: You should either spell the button’s action out as a verb phrase (e.g., Switch to portrait mode, thereby sacrificing some of the saved space) or use some other technique entirely (e.g., two radio buttons).

Quite a late answer, but I’m surprised no one here pointed this out before — it is possible for a toggle switch to show its current state and the state to which it will change simply by having text outside the button, instead of on it. 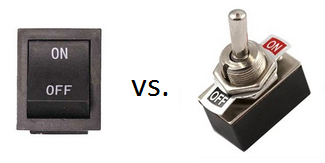 The problem is that in English “on” and “off” are both adverbs and adjectives.

Buttons that have text outside of their body use this very fact to their advantage! Read on…

Let’s focus on the state that’s blue and says ON for example.

Can you tell if the switch is ON currently, or if it will go on if you move/click/tap the slider? Is the text obvious? Is “ON” here a state(adjective) or action(verb)? Unclear. Is the color of any use to help you decide this? Probably, but not certainly — iOS users may be habituated to the states of this design, but there’s no telling how non-iOS users would interpret this. To see what I mean, take this real life trip-switch, which has the same design as the iOS switch — can you tell for sure if the trip switch is currently ON?

The switch below is along the lines of the iOS design, but far worse…

…it’s not even clear which half the slide/click handle is!

On the other hand, the OS X switch design leaves no room for ambiguity:

The question from jensgram’s quote…

…never arises here since the button neither says ON nor OFF — it just stands by itself. Also, there’s no confusion about the context of the words ON and OFF — they are very clearly states (adjectives) since clicking on them (in the normal design) would do nothing!

It may be interesting to note that a modification to this design would allow for the text on the far side of the button to be made click-able/tap-able. If so, the word closer to the switch-handle is the state, while other one is the action, and the roles are reversed when the switch is toggled.

The Windows Metro UI design for the switch goes a step further, and removes the “action” text from the button, and retains just the “state” text:

Whatever you decide – please don’t do what twitter does.