Home » Should I use Yes/No or Ok/Cancel on my message box?

Should I use Yes/No or Ok/Cancel on my message box?


Never use ‘Yes’ or ‘OK’ when you could use a verb instead.

And you can almost always use a verb instead of ‘Yes’ or ‘OK’.

I agree with Lukas Mathis’ postulation that nobody reads your dialog boxes. Use a verb whenever possible instead of ‘Yes’ or ‘OK’ because your buttons will make sense out of context with the explanatory text or title. This is a view that’s further reinforced in Microsoft’s user interface guidelines:

If you want to make sure that users read specific text related to an
action, place it on an interactive control.

In this example, there’s a chance that users won’t read the text
that explains what they’re confirming.

In this example, you can be sure that at least users understand
that they are about to format a disk.

Apple’s Human Interface Guidelines expand on this even further, recommending multi-word verbs instead of “OK” or “Yes” buttons, and clearly defining the suggested regions for an alert box: 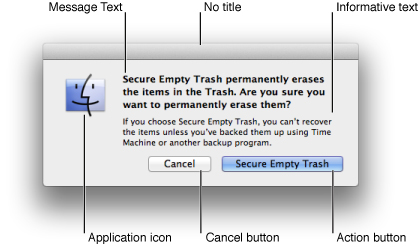 They advise to only use an alert box in the first place if the action is not undoable. On the subject of button labels, they offer this:

Ensure that the default button name corresponds to the action you
describe. In particular, it’s a good idea to avoid using OK for the
default button. The meaning of OK can be unclear even in alerts that
ask if the user is sure they want to do something. For example, does
OK mean “OK, I want to complete the action” or “OK, I now understand
the negative results my action would have caused”?

Using a more focused button name, such as Erase, Convert, Clear, or
Delete, helps make sure that users understand the action they’re
taking.

In short, even if it might seem like the only or most logical options are to offer the user a “Yes” or “No” button (e.g. “Are you sure you wish to log out?”), you can almost always use a verb or phrase instead.

In this way, a user need not read the title or explanatory text to understand how to proceed, and the meaning of clicking either button cannot be misinterpreted.

Also note that, given a choice between ‘No’ and ‘Cancel’, ‘Cancel’ is almost always better for exactly the same reasons as above: the meaning of ‘Cancel’ is clear even if the user hasn’t read the rest of the dialog box. The meaning of ‘No’ is probably clear, but makes less sense when paired with a verb (e.g. ‘Log Out’ and ‘Cancel’ make more sense read alone than ‘Log Out’ and ‘No’).

The use of short words like Yes/No on buttons can be confusing if the user misreads the message on the dialogue, especially if the messages are written badly. (So keep messages succinct and unambiguous in the first place)

Having yes/no ok/cancel forces the user to have to read and understand the message before knowing what the options apply to. For users familiar with a product, they would rather scan the buttons themselves rather than read the message.

So the approach I prefer to take is to make the confirmation of the action a bit more verbose than OK (Eg. Save changes, Add user, Update password) so that it’s very clear what you are about to do. And then keep the Cancel as is – a short and familiar escape route, especially as it should then be clear that it is the ‘Don’t do action’ option.

Even a simple question such as are you sure you want to log out, (if actually required in the first place) should have the buttons Log out and Cancel rather than Yes/Cancel or Yes/No.

This way, the user can quickly scan the buttons and get the gist of what they need to click even without reading the message.

Edit: Concerning the above comments on @greengit’s answer, here’s an example from Skype, of what not to do: 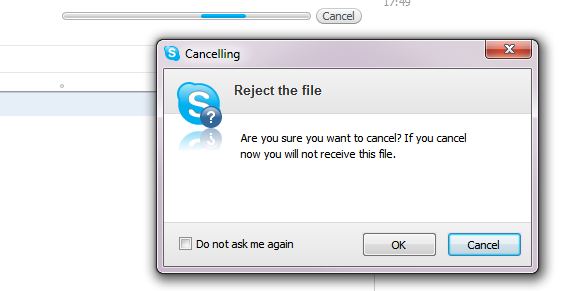 A confirmation dialogue (one that asks a question and involves no input) should have yes/no.

On the other hand, a dialogue that represents an “action” and expects a user input, should have ok/cancel or <action>/cancel.