I’ll answer your questions in three parts: file types, permissions, and use cases for the various forms of chmod.

The first character in ls -l output represents the file type; d means it’s a directory. It can’t be set or unset, it depends on how the file was created. You can find the complete list of file types in the ls documentation; those you’re likely to come across are

chmod 0777 is used to set all the permissions in one chmod execution, rather than combining changes with u+ etc. Each of the four digits is an octal value representing a set of permissions:

The octal value is calculated as the sum of the permissions:

For the first digit:

See the chmod manpage for details. Note that in all this I’m ignoring other security features which can alter users’ permissions on files (SELinux, file ACLs…).

The various forms of chmod

Because of the behaviour described above, using the full four digits in chmod can be confusing (at least it turns out I was confused). It’s useful when you want to set special bits as well as permission bits; otherwise the bits are cleared if you’re manipulating a file, preserved if you’re manipulating a directory. So chmod 2750 ensures you’ll get at least sgid and exactly u=rwx,g=rx,o=; but chmod 0750 won’t necessarily clear the special bits.

Some text variants can come in handy: if you simply want to ensure a file can be executed by anyone, chmod a+x will do that, regardless of what the other permissions are. Likewise, +X adds the execute permission only if one of the execute permissions is already set or the file is a directory; this can be handy for restoring permissions globally without having to special-case files v. directories. Thus, chmod -R ug=rX,u+w,o= is equivalent to applying chmod -R 750 to all directories and executable files and chmod -R 640 to all other files.

So, permissions in Linux are very important. I will try to make a short explanation.

For pieces of a file mode

Every Unix file has a set of permissions that determine whether you can read, write, or run the file. Running
ls -l displays the permissions. Here’s an example of such a display:

I attach a image of pieces of a file mode:

Type can be different thing. For example:

If you want to set some permissions for all directory you can use R attribute, for example:

The chmod command usually expects the input to be an octal number, the leading zero refers to the value of the sticky/sgid/suid bit triplet. In C however, it would make a difference, since 777 would be translated to 01411 (octal), thus setting the sticky bit (see the chmod(2) man page), read permissions for owner and executable bit for group and others (which is a rather strange combination).

I found other picture about Linux permissions and I will attach to understand more easy: 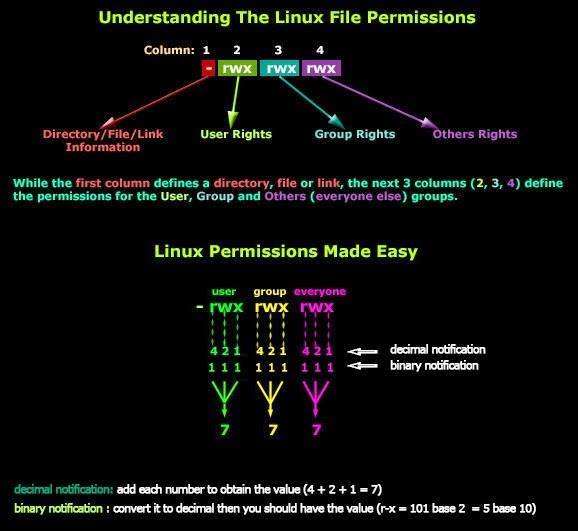 d means it is a directory, if you have a file it is - and if it is a link you will find an l. It can’t be set/unset.

If you use 0777 as permissions you are giving full control (read+write+execute) to every user/group of the system. It is a lazy way to solve problems when you have users/groups that can’t access directories/files.

preloadable_libintl.so is a file owned by user root and group root. The owner has read and write access, the group has only read access and any other user has read access. This can be translated as 644.