Home » What does ‘stage’ mean in git?

What does ‘stage’ mean in git?


To stage a file is simply to prepare it finely for a commit. Git, with its index allows you to commit only certain parts of the changes you’ve done since the last commit. Say you’re working on two features – one is finished, and one still needs some work done. You’d like to make a commit and go home (5 o’clock, finally!) but wouldn’t like to commit the parts of the second feature, which is not done yet. You stage the parts you know belong to the first feature, and commit. Now your commit is your project with the first feature done, while the second is still in work-in-progress in your working directory. 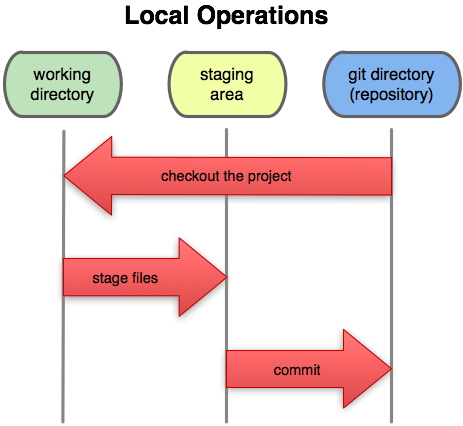 Since everyone so far has answered it the “formal” way, let me do this with alternatives to enhance learning with the power of metaphors.

Staging is a step before the commit process in git. That is, a commit in git is performed in two steps: staging and actual commit.

As long as a changeset is in the staging area, git allows you to edit it as you like (replace staged files with other versions of staged files, remove changes from staging, etc.).

Consider a scenario where you call the movers to get your stuff from your old appartment to your new appartment. Before you do that, you will go through your stuff, decide what you take with you and what you throw away, pack it in bags and leave it in the main hallway. The movers simply come, get the (already packed) bags from the hallway and transport them.
In this example, everything until the movers get your stuff, is staging: you decide what goes where, how to pack it and so on (e.g. you may decide that half your stuff will be thrown away before the movers even get there – that’s part of staging).

From a technical point of view, staging also supports transactional commits, by splitting all operations into what can fail (staging) and what cannot fail (commit):

The commit in git is implemented transactionally, after the staging is sucessfull. Several steps in the staging can fail (for example, you need to commit, but your HDD is 99.9999% full, and git has no space to perform a commit). This will fail in staging (your repository will not be corrupted by a partial commit) and the staging process doesn’t affect your commit history (it doesn’t corrupt your repository in case of an error).

How to display `top` results sorted by memory usage in real time?

Use the top command in Linux/Unix: top press shift+m after running the top command or you can interactively choose which column to sort on press Shift+f to enter the interactive menu press the up or down arrow until the %MEM choice is highlighted press s to...

How can I resolve a hostname to an IP address in a Bash script?

You can use getent, which comes with glibc (so you almost certainly have it on Linux). This resolves using gethostbyaddr/gethostbyname2, and so also will check /etc/hosts/NIS/etc: getent hosts unix.stackexchange.com | awk '{ print $1 }' Or, as Heinzi said...

Scroll inside Screen, or Pause Output

Screen has its own scroll buffer, as it is a terminal multiplexer and has to deal with several buffers. Maybe there's a better way, but I'm used to scrolling using the "copy mode" (which you can use to copy text using screen itself, although that requires the...

How to get execution time of a script effectively?

What is the difference between /opt and /usr/local?

While both are designed to contain files not belonging to the operating system, /opt and /usr/local are not intended to contain the same set of files. /usr/local is a place to install files built by the administrator, typically by using the make command (e.g.,...

Finding the PID of the process using a specific port?

Your existing command doesn't work because Linux requires you to either be root or the owner of the process to get the information you desire. On modern systems, ss is the appropriate tool to use to get this information: $ sudo ss -lptn 'sport = :80' State...

kill -9 (SIGKILL) always works, provided you have the permission to kill the process. Basically either the process must be started by you and not be setuid or setgid, or you must be root. There is one exception: even root cannot send a fatal signal to PID 1...

Try the watch command. Usage: watch [-dhntv] [--differences[=cumulative]] [--help] [--interval=<n>] [--no-title] [--version] <command>` So that: watch -n1 command will run the command every second (well, technically, every one second plus the time...

How can I specify the position for a new column in PostgreSQL?