Home » Why do most public toilet doors open inwards?

Why do most public toilet doors open inwards?


Of things you might touch, you should possibly be least worried about the exit door handle
(see, Enteric Bacterial Contamination of Public Restrooms, Dr. Germ: Charles P. Gerba, etc.). But, as you say, touch-free flush, sink, and soap are often available, and urine is sterile (potentially no need to wash up anyway), leaving floor, air, and door.

Perhaps there are no official sources to cite because the codes don’t prevent doing it right:

A representative for the [Massachusetts] Department of Public Safety
told the newspaper that the state building code does not specify the
direction public bathroom doors must open.

Yet there is still the issue of opening a door into the path of traffic:

Doors that swing outward allow one to exit without gripping a surface
but they must be configured to avoid hitting passing hallway traffic.

Doors opening into the path of egress shall not reduce the required
width to less than one-half during the course of the swing.

I think what you have, as with so much bad design and user experience, is convention and a lack of incentive to do the harder/more expensive thing (no law requiring it, no directive from the client, etc.). Do you think there needs to be more behind it than that?

I believe the answer is actually because of building codes. If a room has only one entrance, it MUST open inwards. This is because if anything on the outside is blocking the door, it can still be opened, and then the person can clear the obstruction manually

Trying to push the door forward might not be enough to clear the obstruction depending on a number of factors, primarily that when pushing on a door, most of your force is going to be distributed across the door and can’t be in a focused spot for knocking over the obstruction.

EDIT: I’ve not had much luck tracking down a direct source for this. There’s a ton of information on Google for building codes — all of it painful legalese– and while I might find it eventually, I could also note that this doesn’t have to be a building code– it could just as well be a convention.

I offer the following experiment:

Alternatively, you can reason that either a code or convention is in place by checking several office buildings, finding all rooms which have only one entrance and are made for small capacity (larger ones usually have multiple entrances and swing outward to avoid crowd crush), and seeing which way they open. If they all invariably open inward, a code is probably in effect (If it were a matter of whim, there would be variance). If most of them open inward with a few exceptions, it may be a convention instead (though it could also be that the doors were modified after inspection).

Presumably, if my above answer is the case, this won’t only happen with bathrooms, but with all similar small rooms with a single entrance.

I believe that in some places it is against building/fire regulations to have bathroom doors opening outwards. Rational or not, I think the reasoning is that an outward-opening door could allow for ‘backdraft’ if a fire were to start in the bathroom.

One solution I’ve seen is the foot pull (see below), but those are not particularly usable either. When I’ve used them, I’ve worried that someone will open the door while my foot is in there. 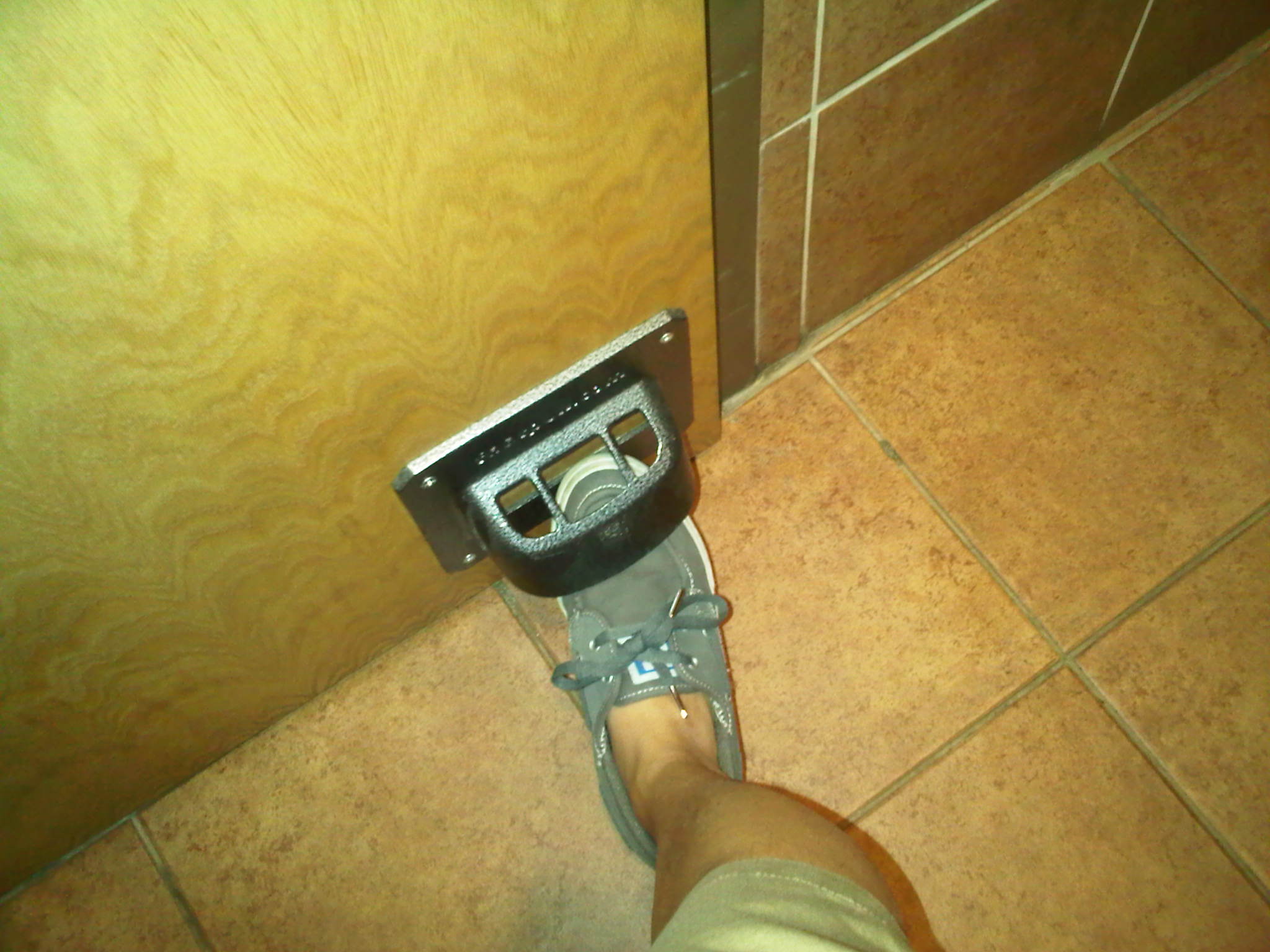