Home » Why do people clear the screen multiple times when using a calculator?

Why do people clear the screen multiple times when using a calculator?


(Older) pocket calculators sometimes have several “cancel” buttons (C, CE, etc.) Typically, the CE button would only clear the last entry but not interrupt the current computation. For example, if you press 10 + 1 CE, you would see a 0, but the calculator still expects a second operand for the addition (i.e. it still has “10 +” in memory). Often, there would be no obvious indication of the current state of the calculator (i.e. is it reset and waiting for a new operation or in the middle of one?) If you want to start anew without having to remember which button is which or how a specific calculator works, you can simply press a couple of times on all cancel buttons and that’s an habit many people kept from that time. 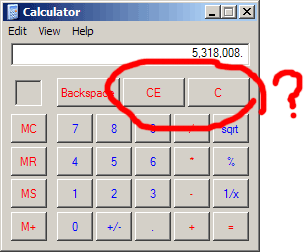 Other answerers have provided great logical reasons for how these habits could come about, but I think it is simpler than that (plus, how often are any of us logical?).

Calculators obviously have a state, since they do multi-step operations, but they don’t clearly show their state. In many calculators, if you see a zero on the screen, you have no idea if the calculator is in the middle of an operation or not. So we press Reset a bunch to make sure.

Plus, many of us have gotten burned by starting a new calculation while the calculator was still in another mode, and gotten a totally unpredicted result. So we press reset a bunch to be sure.

Some calculators are better at this. For example the Win7 calc shows you prior operands. Some smartphone calcs show operands in vertical lines, and clear the screen when you press reset. Perhaps an even better enhancement would be to show the background screen in white if the calculator is truly reset, and colored if it’s in the middle of something.

But there will always be the tendency to push the button a bunch of times, because better safe than sorry! 😉

On some old calculators, the clear button had double duty:

I think this meant that people tended to press clear a few times, to ensure that everything was cleared. It is possible that three clicks would clear the memory as well.

This is one of those habits that people acquired early on in the use of technology, which has continued despite the change in the technology.

And it is an interesting UX question, because the reality that clicking it multiple times has no additional effect does not change the perception. There are other cases of this, I am sure, but we actually just need to understand that this will happen.

There is also the sense of clicking and clicking while I make the decision to move onto something else. It is not then based on habit, but just an attempt to reflect what is going on internally, that I need to clear my mind before I move on.