Home » Will the new Ubuntu finally have a menu that is workable? [closed]

Will the new Ubuntu finally have a menu that is workable? [closed]


The Unity Dash is indeed something very different from what e.g. Windows users are used to. But you can also let the Dash’s application lens (Super+A) filter the shown items by categories, like to only show games: 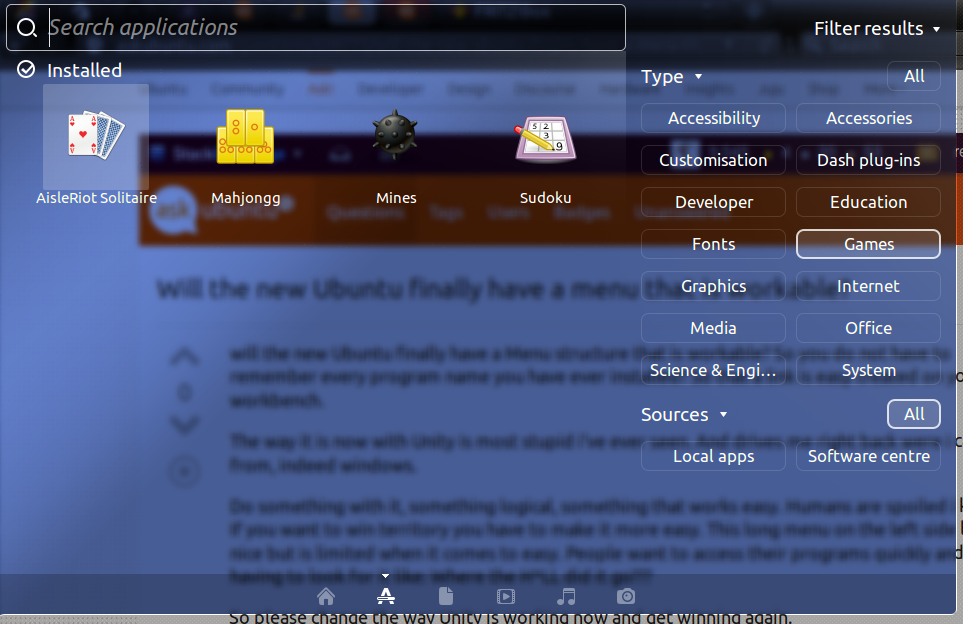 Or if you don’t like that at all, switch to e.g. Xubuntu, which uses another desktop environment called XFCE that is more similar to what you know from Windows (start menu etc.) and is also more lightweight.

You can simply add that DE by installing the package xubuntu-desktop and then select which one to use on every login.

Frankly, I do not understand why would Ubuntu need to cater to the Windows users needs. You don’t see Apple doing that, do you ? Windows and Ubuntu are different systems, hence will have different behavior and different organization. I understand people may be spoiled beings, but when you switch systems be prepared to learn a little bit; or in other words: “When in Rome, try to pick up some Italian, don’t expect people to speak English”.

As for the programs, the core of the question. Byte commander has already provided you with the shortcut Super A, which works well for the 90% of applications that have a .desktop file in the /usr/share/applications folder ( which by the way, has nothing to do with Ubuntu, it’s up to developers to properly package their software and to include that as one of the things ). You can refer to the following question that has been asked on AU long time ago: What is the equivalent to the Windows “Program Files” folder? (Where do things go when I install them?)